1.    Nearly all of us have a bad habit, whether we know it or not. Some people say they want to get rid of（摆脱）it but don't know the proper ways. Here's some advice on how to get rid of bad habits.

Make a list. Write down why you want to stop a certain behaviour, how it's hurting you and how to get rid of it. This will help a lot. Look at that list regularly.

Join in other activities. It's wise of you to do something else when you want to stop your bad habits. If you get angry easily, for example, you can practise having a deep breath or going for a walk.

Give yourself a present. Before you take action against a bad habit, decide what you'll do to celebrate it if you reach your goal,

Keep off bad habits. If you are fat and want to lose weight, keep junk food out of your house.If you are a heavy smoker with coffee, turn to tea and keep away from friends who like smoking.

Be patient. Bad habits develop over years, so you probably won’t be able to get rid of them quickly. In fact, people often give up several times before being successful, so you should be patient.

Find support. Don't be afraid to ask for support from friends, family or other people who have the same bad habits as you. When you talk to others, they might be able to provide advice or encouragement that you usually wouldn't get from yourself.

【小题2】Which of the following is WRONG according to the passage?

2.    Cruz Genet, 11, and Anthony Skopick, 10, couldn’t agree. Were the birds on the ice ducks or geese? There was only one way to find out. So on a cold January evening, the two friends risked onto the frozen pond near their house in Frankfort, Illinois, to get a better look. First they threw a small stone to test it. Then they stepped on it. Believing the ice would hold their weight, Anthony took a few steps, then.... He fell through the seemingly frozen ice. 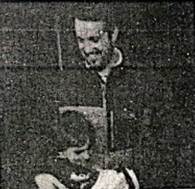 Cruz rushed to help his frightened friend—the pond “ate” him too. Gruz managed to lift himself out of the water and onto a more reliable part. He then carefully made his way to Anthony. But the ice didn’t hold, and he fell in again. This time he couldn’t get out. The boys quickly lost feeling in their arms and legs. Cruz was sure he was going to die.

Anthony’s older sister had seen the boys fall through the ice and started screaming for help. John Lavin, a neighbor driving nearby on his way to the grocery store, heard her. He quickly pulled over. Seeing the boys, he kicked off his shoes, and run into the freezing water. Lavin made his way to Cruz and Anthony and saved them back to land. They were taken to the hospital, where doctors discovered that their five-minute stay in the water had lowered their body temperature nearly ten degrees.

Fortunately, the boys have fully recovered, though they are still moved by their fearless neighbor. “Just to think,” says Gruz, “if he wasn’t there, I could have died.”

【小题1】Why did Gruz and Anthony step on the ice?

【小题2】How did Cruz feel when caught in the water?

【小题4】What is the best title for the text?

3.    Have you ever wondered what wild animals do when no one is watching?

Low cost, dependable and small modern cameras offered a big help. Cameras placed in hard-to-reach places have shot everything from small desert cats to larger snow-lowing cats in the northern Rocky Mountains. Scientists have been able to document the “private” moments of wildlife with leading technology.

Grant Harris is a government biologist with the United States Fish and Wildlife Service in Albuquerque, New Mexico. In his words, “there’s no doubt that these wild cameras are important tools to learn new information on wildlife.” Harris said some images help scientists see the eflects of climate change.

Researchers with the Wyoming Migration Initiative, or WMI, are among those using wild cameras along with global positioning systems, or GPS. But WMI director Matthew Kauffman says as those devices are limited, so is the amount of information they can gather from GPS. However, cameras can be left in very wild areas for days, weeks or even months. They can provide information on how many animals are moving over a given period of time.

Putting those cameras in place requires careful planning. Wild video can show details about animal behavior. However, wild cameras have their problems too. Animals such as wolverines and bears sometimes attack them. Scientists do not know if the attacks are the result of anger or interest. Also, the devices have become popular tools to help hunters look for animals. Some people argue that it is unfair to use the cameras that way.

Even with such problems, wild cameras are clearly an important scientific tool in researching wild animals.

【小题1】What does the underlined word “document” in paragraph 2 mean?

【小题2】Which is a disadvantage of wild cameras?

【小题3】Why do some people argue against using wild cameras?

【小题4】What is the authors attitude towards wild cameras?